McCann approached us to create a series of stop motion TV idents for Subway’s sponsorship of the TV hit series The Big Bang Theory.

The brief was to bring together the two worlds of Subway and The Big Bang Theory. There were four idents in total which would be shown before, during and after each episode which was aired on E4 – Channel 4’s sister channel.

We have also worked with Subway on their Sub of The Day commercial and their sponsorship of the NFL London Games.

Making something for a comedy, has to be fun! We worked with the creatives at McCann London to develop ideas which reflected the look of Subway’s sponsorship for The Big Bang Theory.
Working the creatives at McCann London, we came up with four distinct ideas – a fun collision of the two brands. A celebration of the Subway’s fresh ingredients and the quirky humour in The Big Bang Theory and its spin-off show Young Sheldon.

We then made animatics, which helped us figure out the timing and faming for each scene. This also helped us organise ourselves and our needs for the production. We researched imagery of the food and also got inspired by the company colours to make sure the two brands are intertwined in our ident.

The key is to keep the entire team on the same page and aware of the process. We also worked with our director of photography, Peter Ellmore to figure out the best photography techniques. The team gathered all tools and resources needed to make sure the production runs smoothly.

This is when the art department took the spotlight. Then Picturesmith art team prepped the scenes, chose the backgrounds and organised the set for the shooting to begin.

The set was made up, including the lighting, the tech and prep area for the production. The art department made up necessary props and got them ready for the camera.

During the shooting we were working with a food stylist and their assistant to ensure that the ingredients translate well on footage.

The production took place in our studio in East London. We always scale our team to the side of the project and this particular one required a few specific expertise.

For instance we worked with a food stylist and his assistant to make sure the props are looked after and transfer well on camera. We also worked with Peter Ellmore, with whom we worked numerous times before. Peter was directing the photography of this production.

We shot two of the idents in a week. The advert being stop-motion requires a lot of attention to detail so we were surprised with the time. The credit ought to go to the organisation at pre-production level.

The other two ideas were completed on a later date. As we were waiting for the creative direction to be finalised. Once they were, the production took the same time to be completed.

Once all of the material was shot we needed to put it all together and polish it off. The stop motion footage we produced needed background compositions and flare.

Editing took place in our studio, as well s the colour grading and master.

The sound , however, was done by craft a McCann in house sound editing team. 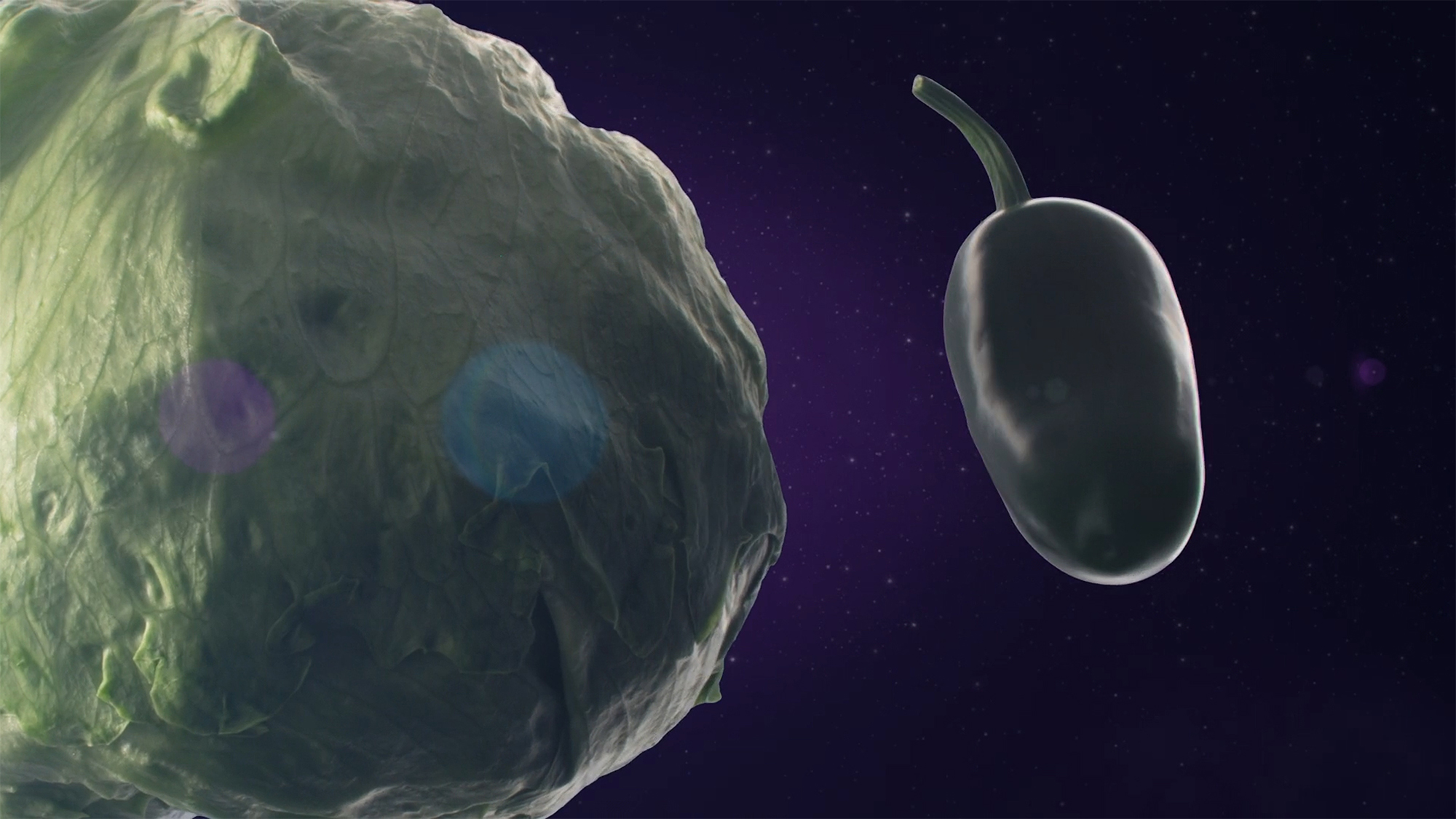 The result of this project was four idents that celebrate Subway’s sponsorship of The he Big Bang Theory.

These idents would be played during the screenings of the show on television, before and after advertisement breaks.

To ensure that the idents withhold screenings on such a large scale we made them short, vibrant and fun.

Merging the Subway and The BiBg Bang theory as business identities, we produced four separate idents.

We combined the ingredients Subway uses in their sandwiches with sciences by simply putting them on a periodic table.

The periodic table is such a memorable visual of the world of science that we felt it would merge the businesses well together.

Space itself perfectly represents The Big Bang Theory. We figured, why couldn’t the planets be veg? With that in mind we made this thought into reality.

To celebrate the TV show even further, we mimicked the Big Bang itself. By colliding the ingredients to make a Subway sandwich.

A science classroom setting reflects the show, add key Subway ingredients in the equation and we’ve got ourselves an ident.

This setting and props marry the two shows well together and celebrate the sponsorship.

The creative team really liked the simplicity of this ident. A cucumber rocket is being launched into space is entertaining to the viewer and connects the two brands.

The rocket is launched into space and takes form of a sandwich. This is great news for our spaceman and his empty stomach.