Picturehouse Cinemas- ‘A Night At The Cinema’ Ident

We teamed up with Picturehouse Cinemas for an ident update in line with their rebrand.

Picturehouse celebrated their 30th anniversary with a new logo. They wanted to also update their ident to keep on brand.

The ident should represent Picturehouse culture, the experience their venues provide and the films they all love.

Also, the ident will reveal the new logo. To ensure that the marketing film is on-brand.

The previous project we have done for Picturehouse has influenced much of their visual identity. It was important that the new ident would adopt a similar approach. Check out our previous Picturehouse ident here.

And as before, this film needs to stand up to repeat viewing, so it doesn’t get old quickly.

Picturehouse originally wanted to tell the story inside their new logo. Although after initial tests we decided this wasn’t making the best use of the screen’s real estate. Back to the drawing board.

We tested a few ideas and the favoured story was that of two friends enjoying – A night at the cinema.

To help with multiple viewing we wanted to add lots of hidden film references. Iconic movies that will reflect the Picturehouse culture and give audiences something new to discover each time they watch the ident.

The film references, combined with Picturehouse experiences like Director’s Q&As, dog-friendly screenings and the food, gave us plenty of content to work with.

To get so much content in such a small timeframe, we used split-screens – a dynamic storytelling technique used in cinema to help with complex narratives.

The whole film is made with 17 split screens. The number isn’t significant to the story, just the minimum we found that worked for this story.

An extreme close-up with a glass of beer being poured. A tribute to Edgar Wright and his famous close-ups.

This scene was first animated in After Effects by Sam Bevington. Who’s observation of foam overspill looked so satisfying. The shot consisted of 63 frames, each of which had to be cut out of paper, glued and numbered before animating in camera.

A deceptively simple shot – it took three false starts before the movement was close to the look achieved in After Effects.

The texture of the paper seems to mimic the bubbles of a freshly poured beer. This wasn’t by design but a happy accident.

From storyboard to cutting mats

With the story planned, we developed the art direction – the overall look – from design and colours to the paper texture and cinematic depth.

We worked with Sam Bevington to create the 2D animation. This had to be frame perfect because we use it to create the paper assets.

The animation technique we wanted is called replacement animation. This is where props that change shape over time, need a new asset for each frame they move on.

We had thousands of assets that had to be designed, cut, glued and organised before we could shoot the scene. Each element was put together by our art department, led by Joana Silva. Her patience, organisation and perseverance enabled this project to finish on time.

Having two stages in our studio helped our DOP – Peter Ellmore – setup each shot efficiently. And the split screens enabled us to be relatively fluid with our shooting schedule.

Most scenes were shot on a glass multi-plane, allowing us to achieve a cinematic depth.

With all the scenes animated in-camera, we assembled the split-screen edit and graded the film in Davinci Resolve.

We worked with a brilliant composer – Richard De Rosa. Who worked wonders with a difficult brief – “Make something like Take Five by Dave Brubeck…”.

To finish the audio, we worked with the brilliant team at Fonic. They crafted a soundscape that complimented the visuals and music to help build an atmosphere of going to the cinema. 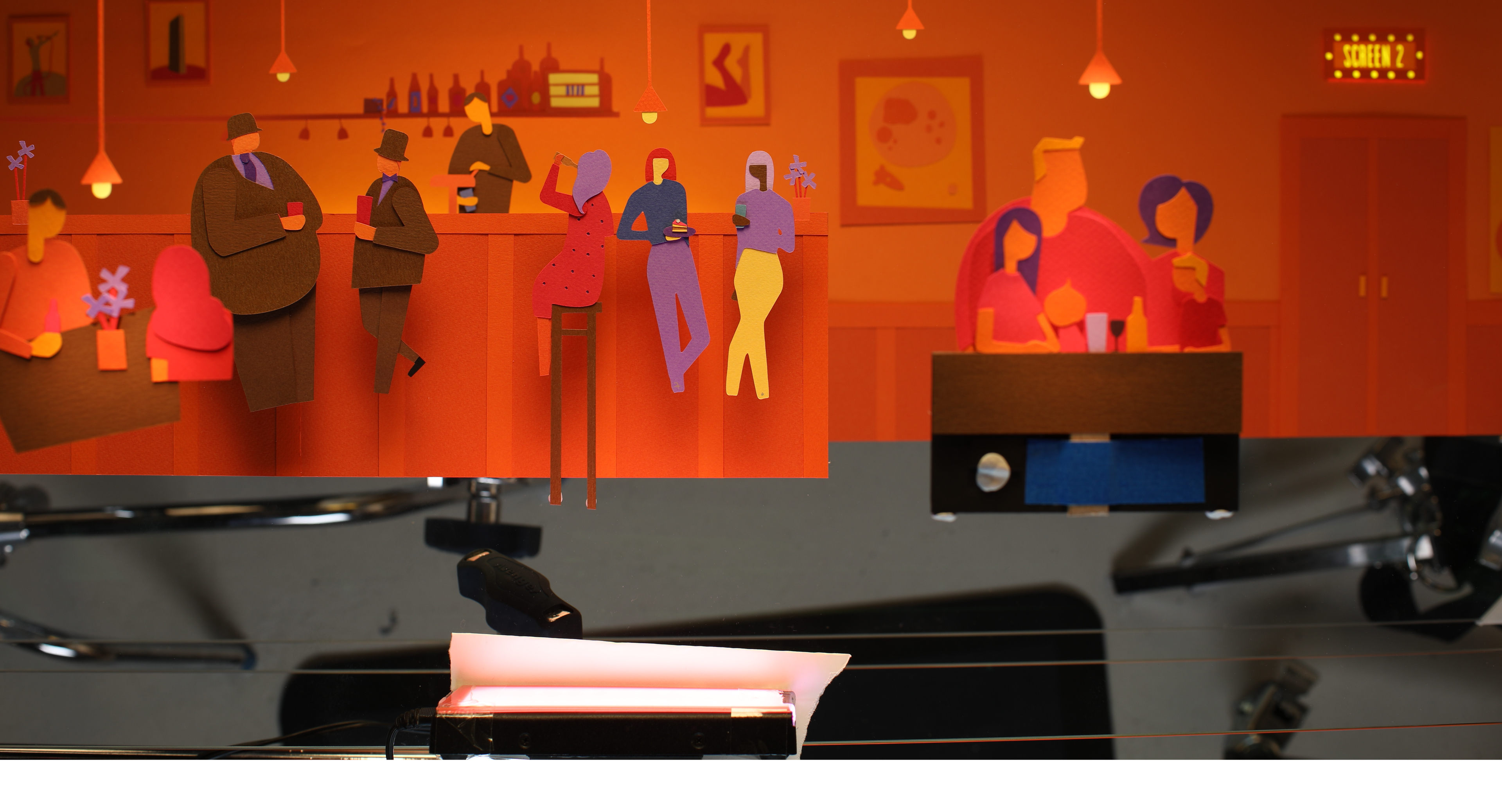 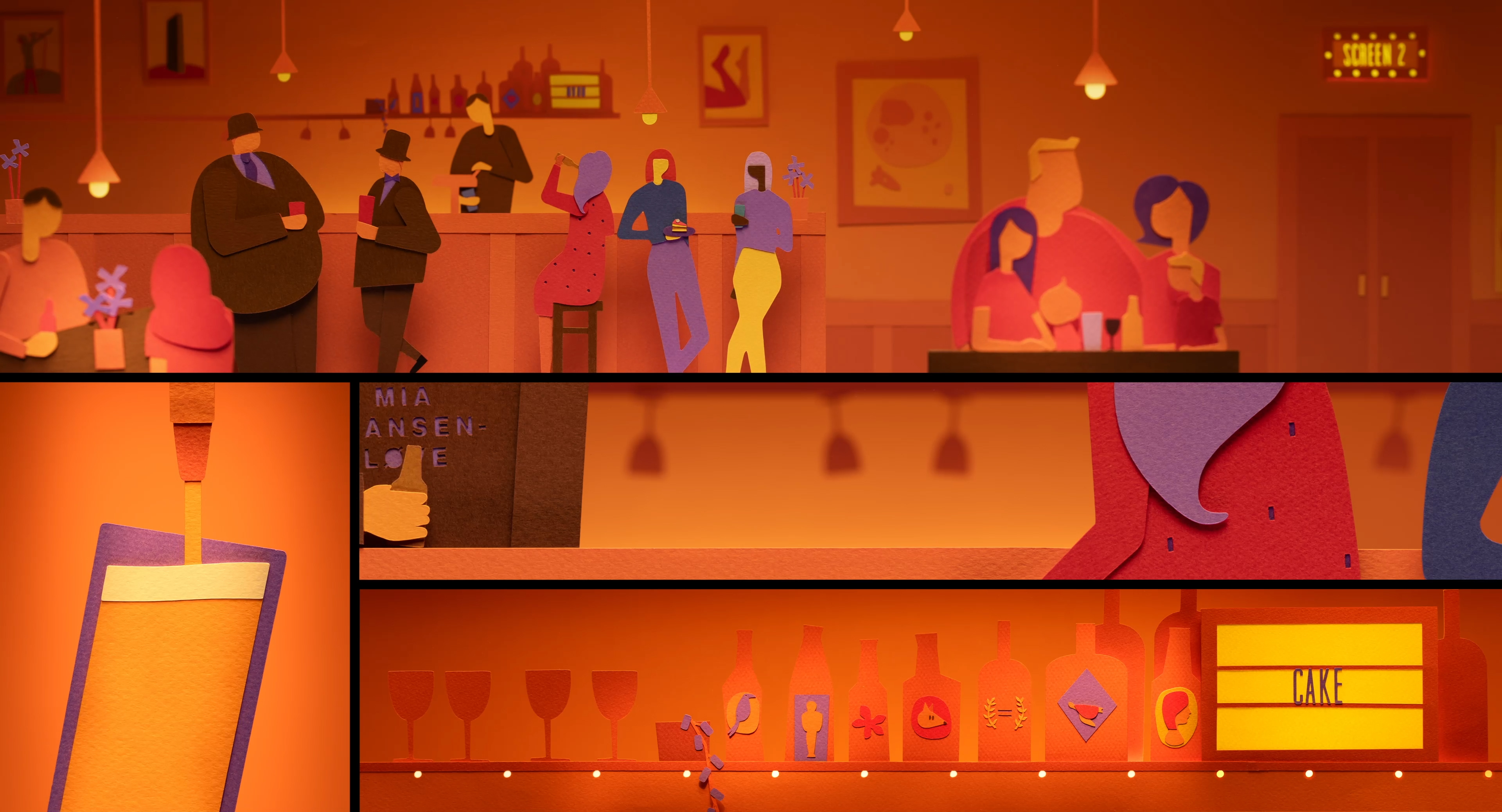 As a result, we have made a 60-second cinema ident for Picturehouse Cinemas. This ident will be aired across their network of 26 UK cinemas and played around 350 times a day before each film. This is around 10,000 plays every month. And the team at Picturehouse use assets and the aesthetic to create more marketing content for the brand.

The exterior scene was a very complex scene to shoot and took us the longest time. One of the main challenges was to keep the glass clean, all pieces in place and organising the movement and assets.

It was important to create a very cozy atmosphere during this scene. This time-lapse also shows how narrow the shot was, keeping us on our toes. There are also a number of lights and rigs visible in the un-cropped shot.

This scene took two days to set up and light, it also used all four panels of glass and backlit background.

“We loved working with Picturesmith, from the very first meeting about the project they took our brief and ran with it. They perfectly captured everything we wanted the ident to do, in a really fresh, striking and engaging way.

Since going on screen with this ident in 2019, we've had hugely positive feedback from our customers, it's great when you hear things like "make sure you get there in time to see the pre-film ident" from a real life, paying customer!”

Sam ClementsHead of Marketing at Picturehouse