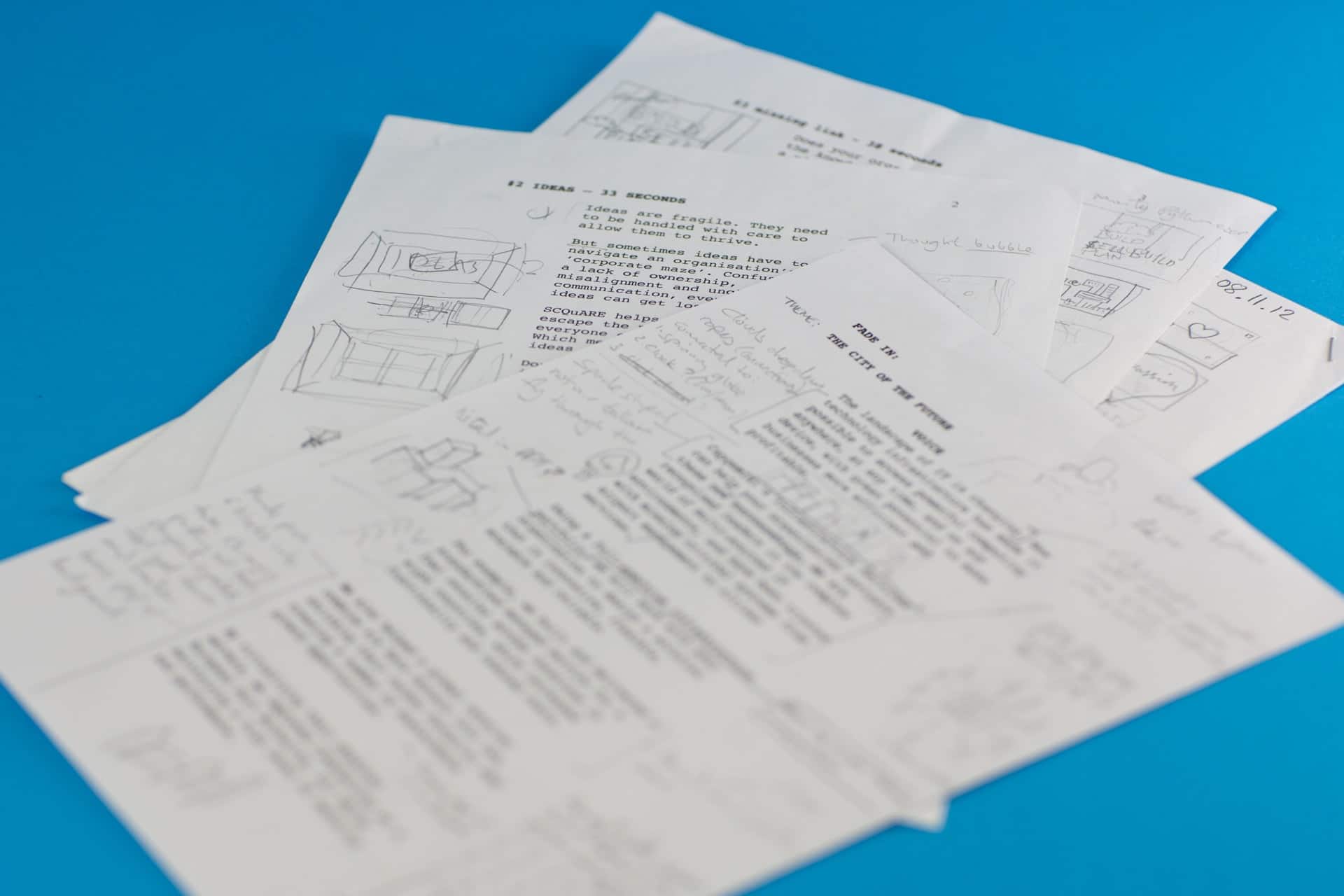 You’ve got something important you want to tell the world about – your new product, a service or maybe a new book. Animation might be the perfect way to tell your story. It can visualise your key points which help understanding and retention.

We’ve put together some tips on what to do and what to avoid when writing a script for your promotional animation.

And although we’ve written this for animation, the principles also apply to video.

Formulating your key messages into a script should be your first step, it’s also the most important.

It’s common for people to think about the pictures first, but this can constrain your thinking and may produce writing that sounds convoluted.

We’ve found results are usually better when the script just addresses the key messages, articulating your story in clear and succinct language – in fewer words than you might think (see word count table below). This is easier said than done, but with these tips, you will be well on your way.

1. What’s the one thing you want your audience to know?

It is natural to want to cram tons of material into a short script. “All of these things are important!” I hear your internal voice say. While that might be true, you risk leaving your audience unsure what it is you’re promoting. It’s much better to leave them with one message that’s crystal clear than ten things they don’t really understand and won’t remember.

So what is the one thing you want your audience to take away having watched your video? Make a list of the 2 or 3 things your story needs to cover including what is the overarching theme. If you can’t be objective, be ruthless in order to get your key messages down to a manageable size. When you have a shortlist, put them in an order that makes sense for your story.

“Creativity is the process of eliminating options” MG Taylor

A script is not a list of bullet points, although that’s a great place to start. People like stories, they resonate with audiences and make messages easier to remember. Like all good stories, make sure yours has a beginning, a middle and an end – which might be your call to action.

Don’t forget that you’re writing words to be spoken, which is quite different from writing for them to be read. Using overly long words can be beguiling and discombobulate your audience (see what I mean?). They better show off your vocabulary, than tell a story well, so they’re best avoided – assume no one’s going to play your video twice in order to understand it better.

It sounds obvious, but grammar is really important. Your script will be read by a voice artist and if the grammar is confusing, and they trip up or emphasise the wrong words, your script will sound confusing. If it sounds confusing, your audience is likely to turn off. Make sure they don’t, check out these tips to get it right.

Avoid jargon, there are no footnotes

Using jargon can be really helpful in conversation with others in your organisation or industry, it’s a form of verbal shorthand. However you won’t be available to explain anything once your video is published online, it needs to speak for itself. So best to avoid it as it can leave your audience in the dark.

Does your script flow well? Read it out loud, or even better record yourself, and play it back, make changes accordingly and record it again.

Don’t be afraid to experiment with tone – how do you want to come across, formal, informal, anecdotal etc. What is the tone you want your organisation to convey?

Help the voice artist with a properly formatted script. Although this isn’t essential, getting the words right should be your priority, not what font they’re in.

Try not to repeat yourself

Animation can be a time-consuming process, so adding repetition unnecessarily will add to the production costs. Additionally, covering the same (or similar) point, can cause problems when telling a story visually – Do we need to return to the same scene? If so how do we get back there? If we don’t, will that make sense?

Once you’ve figured out the language and grammar, you now need it to fit into a specific timeframe.

This table is a guide for how many words your script should be based on your desired length.

This will vary depending on a number of things, including the voice actor, direction and if there’s dialogue.

4. Don’t worry about visuals – yet

If you’re writing a script to pass on to a creative studio, you’ve probably got a picture in your head about how you’d like it to be visualised. From our experience, this can backfire. Trust your creatives to tell your story visually, they may have a different perspective that you haven’t considered.

Often when we get given direction, it’s based in the real world – Man walks into a room and sits at a desk, logs on to a computer… You get the picture, it feels a lot like live-action rather than animation, it’s a visual language that we’ve gotten used to. The trouble is, this isn’t necessarily the best way to tell your story visually.

Our advice would be to find a studio you can communicate well with – having a good rapport with your creative team can make the storyboard and production phases a lot smoother, with better results.

“Any fool can make something complicated. It takes a genius to make it simple.” – Woody Guthrie

There’s a natural urge to want to cram a Greek tragedy into a 90-second animation. By doing this, you’re likely to leave your audience unsure of what your story is actually about. Remember when you had to ask for directions – before smartphones and Sat Navs pointed the way? You stop to ask directions, and after the 3rd or 4th instruction, the voice in your head is telling you “you’ll never remember all this!”. Driving off, you’ve already forgotten most of the directions – and you’re still lost. And this is when the information is important, you need to understand it in order to get to your destination. With an online animation, your audience is almost certainly not captive, so if they get lost in the detail, they’ll close the web page never to return.

The point is this – too much information and you’ll lose people. Give them some keywords, plus something they can relate to and it’ll stick. And if it’s too complex to say – let the visuals do some of the hard work.

“At one agency meeting with Steve Jobs, we were reviewing the content of a proposed iMac commercial when a debate arose about how much we should say in the commercial. The creative team was arguing that it would work best if the entire spot was devoted to describing the one key feature of this particular iMac.

Steve, however, had it in his head that there were four or five really important things to say. It seemed to him that all of those copy points would fit comfortably in a thirty-second spot.

After debating the issue for a few minutes, it didn’t look like Steve was going to budge. That’s when a little voice started to make itself heard inside the head of Lee Clow, leader of the Chiat team. He decided this would be a good time to give Steve a live demonstration.

Lee tore five sheets of paper off of his notepad (yes, notepad—Lee was laptop-resistant at the time) and crumpled them into five balls. Once the crumpling was complete, he started his performance.

“Here, Steve, catch,” said Lee, as he tossed a single ball of paper across the table. Steve caught it, no problem, and tossed it back.

“Now catch this,” he said, as he threw all five paper balls in Steve’s direction. Steve didn’t catch a single one, and they bounced onto the table and floor.

It’s a great book worth reading, get it here, here or here.

Internal communications are really important and can become more complex the larger the organisation is. Although this is more of a captive audience, you shouldn’t take this for granted, why make a 7-minute video, when 2 minutes is plenty?

Another consideration is the opportunity cost to your organisation. In this hypothetical scenario, those extra 5 minutes viewed by 2,000 staff add up to 166 hours! What’s your organisation’s average hourly charge out rate x 166? Now add that on to the cost of producing the animation. You get the idea…

The second iteration of your script will be better than the first, imagine how good the seventh iteration will be? As this is a story worth telling, make sure you devote the time to getting it right. Get someone else to read through for an objective perspective on the message, language and grammar. Now get writing.

If you need more help there are a ton of books or contact us for more information.